Everything You Need to Know About Narcolepsy 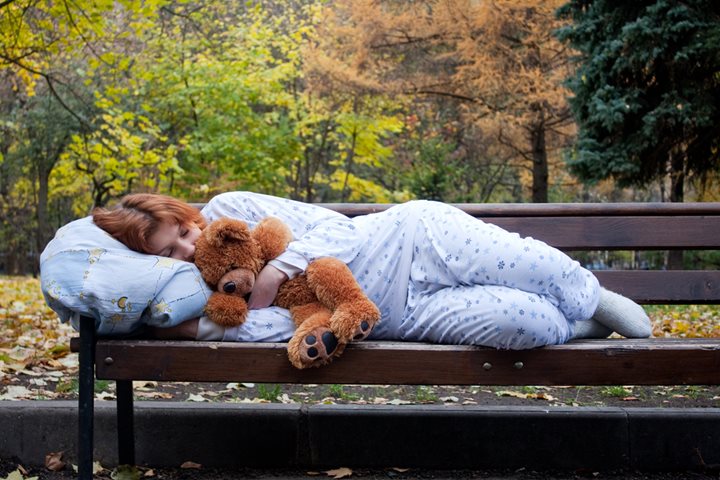 Narcolepsy is a brain disorder characterized by frequent and overwhelming daytime sleepiness along with occasional bouts of falling asleep accidentally, no matter what the person is doing, although especially during relaxing circumstances.

To understand narcolepsy, it is important to first understand normal sleep. Most people, when it’s time for bed, lay down, close their eyes, and slip into the sleep cycles normally. They pass through three light stages of sleep into the deepest sleep, the rapid eye movement (REM) stage, before rising back out again. The process repeats itself throughout the night, taking about an hour and a half to reach the REM stage, which lasts for around twenty minutes. REM sleep, so named because of the twitching of the eyelids, is when the mind dreams, breathing grows shallow, and the arms and legs become limp and paralyzed (known as sleep paralysis).

Narcoleptics, on the other hand, skip the first three non-REM stages and go straight to REM sleep, even and especially during daytime episodes. They also tend not to remain in the deepest of the stages as long either. Because their sleep fails to follow the normal pattern, the quality of their nighttime sleep is not as good. Additionally, the frequent “naps” during the day make it more difficult to sleep at night and further decrease sleep quality.

Although narcolepsy may develop in older adults, it usually begins somewhere during the late teens to early twenties and is very rare in young children. Both genders are affected equally by it, and although it is not an uncommon condition, very little is understood about it.

Scientists are not sure exactly what the causes of narcolepsy are. There is a slight genetic component to the disorder, but other things likely contribute more—brain injuries, infections, and autoimmune disorders are all probable suspects, according to the National Institute of Health.

What are the Symptoms of Narcolepsy?

As if sporadically falling asleep isn’t enough for a person to manage, additional symptoms and problems can occur separately or in tandem with narcolepsy.

“Cataplexy” is another frequent problem for narcoleptics and occurs in more than two-thirds of cases. A feeling of weakness sweeps over the body, and the person loses much of their voluntary muscle control, resulting in anything from a droopy eyelid to slurred speech to complete collapse. Even though they may not be able to move, they are completely conscious. A cataplectic episode may arise completely out of the blue or during times of intense emotion, like rage, surprise, or stress. Laughter, however, is the most common trigger.

“Disrupted nocturnal sleep” is another symptom of narcolepsy. As mentioned previously, because narcoleptics don’t stay in the REM cycle as long as normal sleepers, they wake more often. “Sleep paralysis” is often a problem, because of the rapidity with which the REM cycle is entered and exited. The body fails to respond to the awakened state, and so despite consciousness, the arms and legs won’t respond. Along with the sleep paralysis, extremely vivid hallucinations may result upon entering (hypnagogic) or leaving (hypnopompic) sleep.

How Do You Live with Narcolepsy?

Narcolepsy is a lifelong disorder for which there is no cure. Patients must undergo a series of comprehensive diagnostic tests; the best of which are a polysomnogram (PSG) and multiple sleep latency test (MSLT). The PSG monitors the duration and occurrence of sleep cycles, while the MSLT measures daytime episodes of sporadic sleeping.

Once a diagnosis has been confirmed, the doctor may prescribe drugs for narcolepsy symptoms. Modafinil or sodium oxybate may be used to combat the narcolepsy; conversely amphetamine stimulants may be used to counteract the feelings of exhaustion. Separate medications are required for the cataplectic symptoms. It is important to remember all of these medications come with their own side effects.

Lifestyle changes can also be effective. Avoiding stimulants, like caffeine, help ensure quality night time sleep, as can relaxing at night and avoiding smoking, alcohol, and heavy meals right before bed. Perhaps most important is to maintain a careful schedule, as the body responds better to a regular regimen.